SyncToy, the free files and folders synchronization software from Microsoft, is one of the rare gem of Microsoft released freeware which has impressive features and reliability, has been updated to version 2.1. SyncToy v2.1 is powered by the latest synchronization engine from Microsoft Sync Framework 2.0, and promises better performance and robustness.

The main function of SyncToy is to synchronizes files and folders between locations, which makes it ideal to be used to share files, such as photos, with other computers, or create backup copies of files and folders. SyncToy also helps users who need to maintain and keep two storage exactly in sync by doing the heavy lifting involved with the copying, moving, and synchronization of different directories. SyncToy works by allowing user to create and definite multiple sets of folder pairs, and able to sync these folder pairs at the same time with three synchronization mode – synchronize, echo or contribute, with support for sync of renamed files.

To supplement some lack of functionality, such as scheduling, SyncToy supports command-line arguments, which allow users to use Task Scheduler to automatically schedule and run SyncToy synchronization. 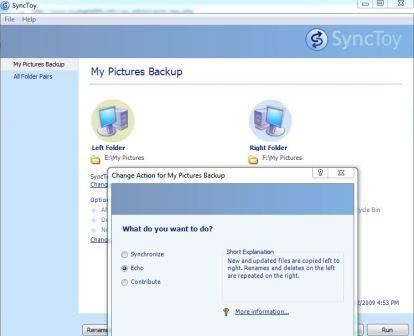 Features and improvements in SyncToy 2.1: