System Repair Engineer (SREng) is a security diagnostic software tool which doubled up as system configuration and system maintenance software to detect system errors or issues and then adjust or repair the system accordingly. The main purpose for the development of SREng is to make it easy for users to detect some common system issues, changes or damages caused by computer virus or malwares. 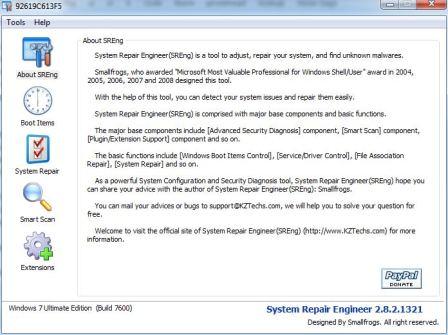 System Repair Engineer is developed by KZTechs.com webmaster Smallfrogs, who is awarded the Microsoft Most Valuable Professional for Windows Shell since 2004. Features of SREng includes the following:

With System Repair Engineer (SREng), user can detects the most common issues in user’s computer and repair them by themselves. Beginner user of SREng can use Smart Scan function scan their computer to generate a report log, where computer expert can analyze the log and provides some advices. System Repair Engineer can also be used to delete and remove add-ons from IE web browsers, which otherwise cannot be removed.