T-Mobile has announced its new myTouch 3G Fender Limited Edition. The phone basically is a T-mobile myTouch 3G with a Fender guitar sunburst-finish inspired design which has been designed in partnership with Fender. According to T-mobile, Eric Clapton has also joined to unveil this new phone and the phone will be preloaded with Clapton classics including “Layla”, “My Father’s Eyes”, “Rock ‘N’ Roll Heart” and “Wonderful Tonight”. 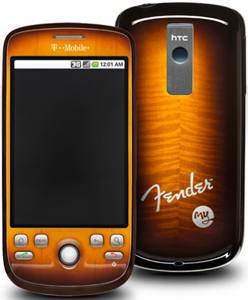 The Fender Limited Edition has been designed to run on Android 1.6, comes with 16GB microSD memory card, a 3.5mm headset jack and an enhanced music player which is being developed by HTC. The enhanced music player enables users to toggle between different views, change a song or album by simply touching the album art and create ringtones from songs that are playing.

The T-Mobile myTouch 3G Fender Limited Edition is expected to be available by 20 January at T-Mobile stores and online at www.T-MobilemyTouch.com. The phone is priced at $179.99 with a two-year service agreement with qualifying voice and data plan.