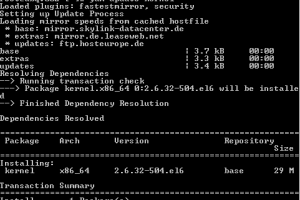 In CentOS or RedHat Linux operating system, upgrading to latest version of kernel is important to ensure that all security vulnerabilities or loopholes are patches and new features are applied. In addition, as Linux specially CentOS is one of the most popular Linux flavor that hosts the cPanel web hosting control panel, the leading control panel which manages the websites in the web hosting industry, […]

The number of CPU instruction sets has kept growing, and likewise for the operating systems which are able to run and support on more than one CPU system architecture. For example, a Linux OS such as Ubuntu, Fedora, Redhat, Linux Mint, Debian, Arch Linux, openSUSE and CentOS can run on Intel or AMD CPU in either 32-bit or 64-bit flavor. In addition, some Linux also […]

If you have install new applications in Unix or Linux operating system, the rehash command can be used to recomputes the internal hash table of the contents of directories listed in the path environmental variable to account for new commands added.