Previously we mentioned about MSI AP1900, the world’s slimmest all-in-one LCD PC for consumer market, now Tangent has just announced a similar concept all-in-one PC suitable for both home and office use. Named as Vita LT, it is claimed to be much more thermally efficient, which draws only 24 Watts total system power including those needed by peripheral devices such as DVD ROM, hard disk, DDR2 memory and many more. 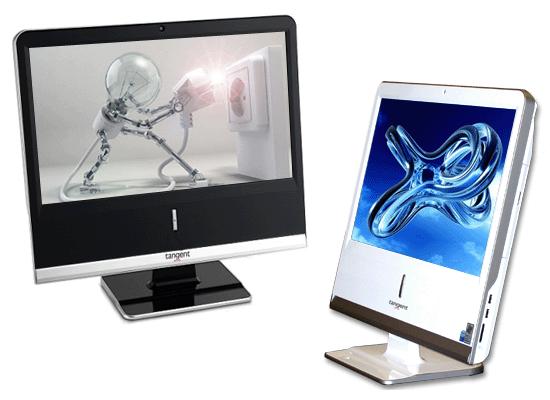 The new PC is powered by Intel Atom N270 processor clocking at 1.6GHz and further backed up with a maximum of 2GB of DDR2 memory as well as 250GB hard disk, it is far more sufficient for normal office applications and web surfing. However, since it utilizes 945GSE chipset with GMA950 graphics core, it may not capable to run smooth 1080p HD media playback just like what being limited by common nettop solution in the market. Similar to AP1900, it is designed with a 18.5-inch LCD display that able to scale up to 1366 X 768 resolutions but what make it different is Vita LT only requires 24 Watts instead of 45 watts required MSI AP1900 solutions or even higher that can be offered by other vendors’ solutions. Some other IO functionality includes USB 2.0 ports, Gigabit Ethernet interface, 802.11a/g/n wireless solutions, 1.3 megapixel webcam and etc.

The Vita LT is already reaching consumer space and at a retail price of around $1000, it is considered quite high in pricing by looking at its hardware specifications.