Terminator Salvation is a 2009 American science fiction action film, which is the forth installment in the Terminator series. Terminator Salvation film in set in 2018 and focuses on the war between Skynet and humanity, with the human Resistance fighting against Skynet’s killing machines, marking a departure from the previous three Terminator movies, where the stories were set between 1984 and 2004 and used time travel as key plot element.

Although Terminator Salvation has received mixed critical reception following its release on May 21, 2009 in the United States and Canada, the movie is a must-have collection for Terminator series lover. Now there is chance to download and own digital version of Terminator Salvation movie for free. 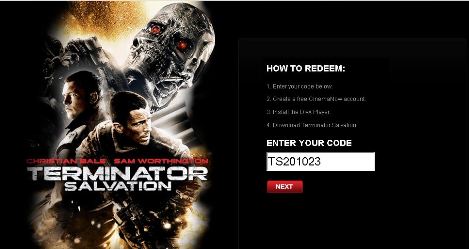 Roxio CinemaNow movie store is giving away free download of Terminator Salvation as a promotion to help launch the addition of movies in the DivX format on CinemaNow. The movie is encoded in DivX format, and can be played on PC, Mac or any DivX device including the PlayStation 3, Blu-ray players, mobile phones, DVD players and more.

Note that the Terminator Salvation available on CinemaNow has the rating of PG-13, which means it does not contain director’s cuts on violence and nude scenes. The free movie offer is valued at $19.95. Offer valid for registered DivX users in the United States until March 18, 2010 or while supplies last. Only one download is allowed per DivX account. International user needs to use proxy server or VPN based in US to access the web page, or else will encounter the following error message instead:

This movie store is currently unavailable outside the United States.