A car that could fly would solve all traffic woes and become a dream come true for many road users. A plane that could take to the roads in bad weather would also give pilots a safer alternative when flying. But can a flying car or a road-worthy plane become a reality in the near future? 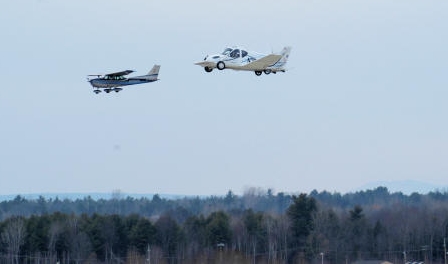 A machine called Transition has taken to the skies recently after months of static, road and taxi testing. Measuring 19 feet long, 80 inches wide, and 6 feet 9 inches high in folded mode, the two-seated Transition resembles a car with collapsible wings. This flying machine runs on unleaded fuel on the roads and in the air. It can cruise at highway speeds on land and exceed 115 miles per hour in speed when flying. It has been categorized by the Federal Aviation Admin under the light sport aircraft category.

This flying car has proven that it could fly in its test-flight at the Plattsburgh International Airport in New York on Mar 5. After this initial taste of success, a production prototype will need to be built, tested and certified. The company, Terrafugia (which in Latin means ‘escape from land’) however, is confident of making its first ‘roadable aircraft’ delivery in 2011.

First Flight of the Terrafugia Transition