TI (Texas Intruments) is one of the ARM licensees and is famous with its low power thermally efficient processor targeted for various usages. Just recently, the company has announced a new HD (High Definition) capable IP camera reference design named as DM368IPNC-MT5 as an effort to simplify and speed up customer design. Being powered by DM36x-400 SoC (Silicon on Chip) DaVinci processor, it is claimed to be able to process full HD H.264 format in 1080p video frame at 30fps (frame per second) while able to maintain a thermal envelope below three watts, which is superior in terms of performance per watt as compared to other rivals’ solutions. 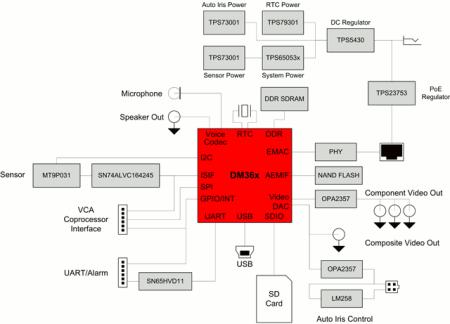 The DM368 platform is built by Appro Photoelectron with both cost and performance optimized in mind and has specifically tailored for media centric applications such as IP camera and video analytical applications. As compared with its predecessor DM365 design that can process up to 720p media at 30fps, the new design has able to scale up the capability to process up to video files 720p at 60fps or 1080p at 30fps. In order to make full use of its capability, the platform has integrated a five megapixel CMOS camera sensor from Micron Aptina, RS485 serial port, USB port, Ethernet, SD card slot, Composite video output port as well as an embedded PoE (Power-over-Ethernet) Powerline technology.

The new design is already available now and at a price of $995, it will be bundled with licensed free Linux application software package for board vendor to kick start new design on TI solution based on own customization depending on the need of IO interfaces.