Transformers: Buy the Products Not The Movie

Blockbuster movies will usually result in the high demand for their respective toys and merchandise. Star Wars, Harry Potter, Toy Story, Shrek, and Spiderman, are some of the big hits that come to mind. Buy toys that are made to sell a blockbuster movie? That’s right. Transformers is produced with the ultimate goal of selling toys and products. 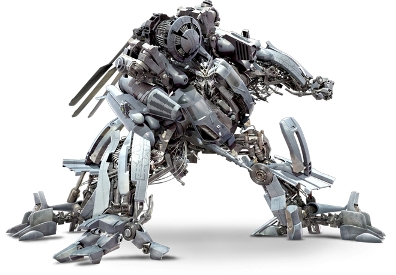 Transformers was introduced in 1984. It depicted a saga of good against evil. An intergalactic war erupted between two races of robots, the Autobots and the evil Decepticons. The robots disguised themselves as objects on earth including cars, trucks, planes, machines and other technological creations. The fusion of man and machine reaches its zenith in this fantasy movie.

The generation that grew up with Transformers is in their 30s now; they have the purchasing power to revive their nostalgic interest in the film and spend money in toy shops. Hasbro, the company that markets the products, has produced a variety of products targeted at this group. The Transformers Music Label Frenzy and Rumble playing earphone can be transformed into a robot with some simple maneuver and twists. Hasbro has also collaborated with several well-known names in business to optimize the popularity of their products. A cellphone, binoculars, and a camera can be converted into new robot figure toys. The Hasbro Optimus Prime Voice changer Helmet and the Transformers Sports Label Convoy (transforms from a pair of plastic half-scale Nike shoes into a toy robot) are sure to attract the techno-savvy X–generation. The craze with technological gizmos and toys in recent years make this marketing strategy a good bet.

Well, if movies can influence one’s behaviour, why not make the medium a direct marketing strategy?