The provider of high quality, competitively-priced audio peripherals for video game consoles and personal computers, Turtle Beach has announced the launch of its newest wireless headphones for Xbox 360 gaming console – Ear Force X4, which features Dolby 5.1 channel surround sound that able to enhance XBOX 360 experience with realistic positional sound cues emanating from all around the player. 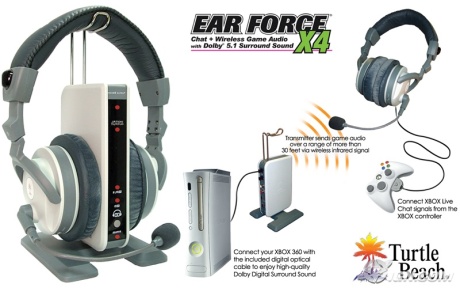 “Our previous generation of wireless XBOX 360 headphones improved XBOX gaming by combining enhanced stereo game sound with XBOX Live chat, for a personal experience that isn’t possible with speakers and an XBOX Communicator,” said Mike Carducci, Marketing Manager for Turtle Beach. “The addition of Dolby 5.1 channel surround sound in our new X4 expands the game action all around you. Unlike stereo headphones, you can hear every 3D sound cue as you communicate with teammates whose voices are inside your head. This, in addition to the other game-centric enhancements, such as Chat Boost, mic monitoring and so on, makes us confident that the X4 will become a must-have accessory for serious XBOX 360 gamers.”