We keep on hearing new Intel Atom processors being released to the market and in order to compete against the giant chipmaker that tends to monopolize nettop and netbook market, VIA Technologies has recently announced a new series of low power and low cost processor under Nano family. Named as Nano 3000 series available with both L-series and U-series, they are targeted for mainstream desktop and ultra low power mobile laptops respectively with higher clock speed as well as extended SSE Instruction set. 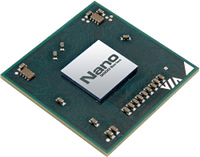 Available in six different SKUs (Stock Keeping Units) ranging from 1GHz to 2GHz, it offers a wider selection for board makers when comes to specific segment requirements and what makes it stands out from the crowd is the new enhancement with SSE4 (Streaming SIMD Extension 4) as compared to typical SSE3 being available in Intel Atom that can boost up graphics, multimedia and web applications processing power significantly. Besides, VT (Virtualization Technology) has been incorporated and these combination can deliver a 20 percent greater performance while consuming 20 percent lesser of power with significant performance per watt leadership suitable for low power applications. In comparison, a Nano 3000 clocking at 1.6GHz (as most of the maximum clock speed for Atom processor) can overtake Intel N270 processor by 45 percent based on PCMark 05 benchmarking test. That is not all, its embedded PadLock security engine will able to offload AES (Advanced Encryption Standard) function to hardware engine that would otherwise consume excessive CPU cycles when running with software assist.

No pricing information yet but the Nano 3000 processors are already available for OEM (Original Equipment Manufacturer) and board makers for early samples with volume production scheduled at the first quarter of 2010.