VIA Nano processor is supposed to compete head-to-head with Intel Atom processor but was not performing that well as expected. As an effort to promote its Nano processor, VIA Technologies has recently added two new motherboards to the embedded market. Named as Epia M800 and N800, they are both being designed in mini-ITX and Nano-ITX form factor respectively with slightly different feature sets suitable for various usage models. 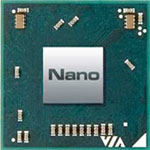 The new Epia M800 and N800 are the successor for its previous generation M700 and N700 that were based on C7 or Eden ULV processor initially. While still maintaining the same VX800 northbridge/southbridge combo chipset, the new M800 and N800 series have been upgraded to Nano 64-bit that can offer much higher performance with improved architecture and maximum clocking of 1.6GHz. For M800, the platform is integrated with 2GB DDR DIMM memory, an IDE interface, two SATA connectors, Compact Flash slot, USB ports, DVI video output and etc. And all these feature sets are well packed into a mini-ITX standard form factor measured at 6.7×6.7 inches. On the other hand, Epia N800 is mounted with a 1.3GHz Nano processor and at a relatively smaller form factor measured at 4.7×4.7 inches, it features with 2GB SODIMM DDR2 memory, Ethernet, USB, VGA, LVDS¸IDE, two SATA ports which is suitable for embedded system with dual independent displays capability.

No pricing information yet, these boards are already available in early sampling stage now and is compatible to run on Windows XP Embedded, Windows CE as well as Linux Operating Systems.