With the market trend moving towards smaller form factor motherboard design, board manufacturers are aggressively driving towards this direction and similarly for VIA Technologies, the company has just announced a new Mobile-ITX standard targeted for ultra small form factor design such as UMPC (Ultra Mobile PC) and smartphone markets. 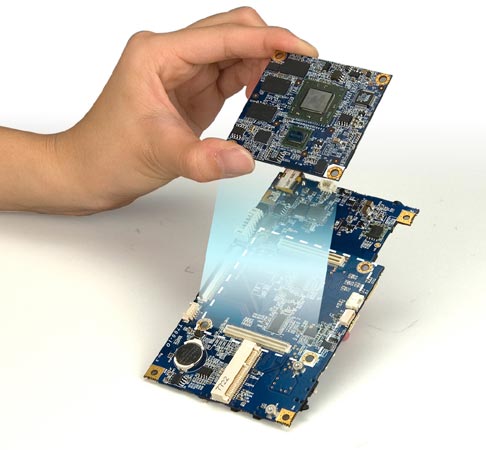 Mobile-ITX is the fourth generation of miniaturization form factor driven by this fab-less company since the first Mini-ITX being announced back to 2001. With a new standard form factor coming out almost every two to three years from Em-ITX, Nano-ITX, Pico-ITX and the newly announced Mobile-ITX, the board size has been consistently reduced by approximately 50 percent (except Em-ITX) that makes it a great advantage for next generation ultra compact X86 based embedded PC systems. The Mobile-ITX standard measured at only 6cm x 6cm, which is even tinier than credit card size has been shrunk by half as compared to Pico-ITX form factor design. Impressively, the COM (Computer-on-module) has able to pack CPU, memory controller, graphics and necessary IO interfaces such as LCD, USB, LPC, SPI, IDE, SDIO, GPIO and etc that offers a feature-rich connectivity options possible even on a compact and lightweight design. To make it a full complete solution, there is also a carrier board being developed so that the Mobile-ITX module can be plugged into it for feature expansion.

In conjunction with the announcement, VIA Technologies has released a new reference design based on VIA C7-M ULV processor pairing with its VX820 media chipset to accelerate customer design to market.