Just recently, VIA Technologies has just announced a new platform targeted for server market. Named as VB8002, it is a Mini-ITX form factor design powered with VIA’s famous solution utilizing Nano processor, which is positioned against Intel Atom processor in nettop market, besides other applications that require high performance per watt ratio solution. 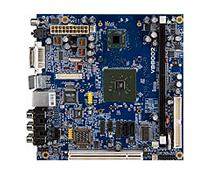 Unlike Intel solution utilizing a relatively older chipset 945GSE solution, VIA Technologies integrates a media system processor, named as CX700M2 that is claimed to be able to scale up the digital multimedia performance suitable for wider usage model as consumer based server and even as a home entertainment system. To make it more powerful, it features an on onboard HDTV encoder based on VIA’s Advance ProScale Technology that is believed to enhance the media playback resolution for greater visual experience. On top of this, VIA proprietary UniChrome Pro II IGP (Integrated Graphics Processor) will able to accelerate both MPEG2/4 and WMV9 media playback with hardware assist to free up CPU resource needed for normal processing power.

No pricing information yet, some analysts do expect it to be competing well against Intel Atom solution in both performance and pricing.