Vodafone 360 Samsung H1 smartphone which has been unveiled last month is now available for pre-order via Vodafone. The smartphone is being developed for Vodafone with preloaded Vodafone 360 social media platform. 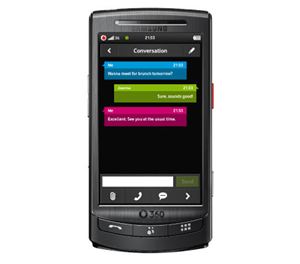 Featured with a 3.5-inch touch screen display, Vodafone 360 Samsung H1 is also equipped with a 5-megapixel camera with auto-focus function. It integrated with Vadafone 360 service that will automatically synchronize all the contacts from the phone, Facebook, Windows Live Messager and Google Talk as well as automatically backup all the phone content to the internet.

It boasts with 16GB internal memory, supports Wi-Fi, GPRS, Bluetooth and HSDPA connectivity. Additionally, it comes with battery that provides up to 10 hours of talk time, hand free headset, an MP3 player and java games.
The Vodafone 360 Samsung H1 is expected to be available by 30 October. It will available for free when the customers sign up a two-year contract at about $49 per month. This includes 600 anytime minutes and unlimited Internet access.