A fan of Bollywood Hindi movies and films? If you’re not a resident in India, and are not keen to buy DVD and Blu-ray disc or subscribe to live or on-demand streaming TV service, it’s pretty hard to find ways to watch Bollywood movies for free. Of course, unless you are downloading from pirated sources.

Thanks to YouTube, everybody with Internet connection now have chance to watch full length Hindi movies online. A YouTube channel named YouTube BoxOffice is offering free viewing of Bollywood movies, in partnership with Intel. 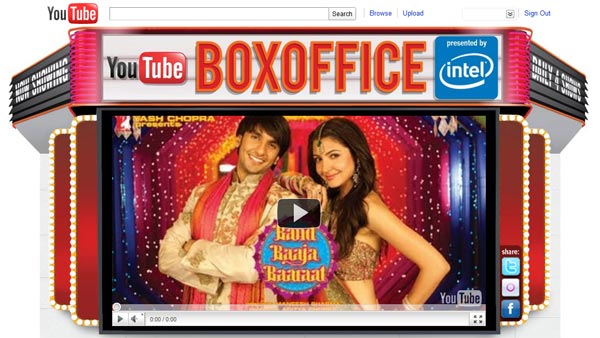 The featured film can be watched at high quality resolution of up to 720p HD, though most other movies offered for free only available at resolution of up to 480p, with playback at 360p by default. As the free movies are made possible with the sponsorship of Intel, expects to see Intel advertisements every now and then, at interval of around 10 minutes. But even with ads, Hindi film lovers will probably still enjoying the free online on-demand video (VOD) streaming of Bollywood movies.

The current featured movie of YouTube BoxOffice is “Ainvayi Ainvayi – Band Baaja Baaraat”, a romance comedy starring Ranveer Singh and Anushka Sharma. However, the movie is offered only to India residents when visiting the YouTube page with an IP address originated from India. If you are in India, or can have an Indian IP through VPN or proxy, you can watch the Band Baaja Baaraat directly from here, now.

However, there are several movies listed under the “More Movies” tab of the channel that can be viewed from any counter in the world. The free movies available include:

Unfortunately, the YouTube BoxOffice channel does not offer any free Hollywood blockbuster movies that broke box office records, even tough when talking about Box Office, more people will relate it to Hollywood movies that took in hundreds of millions dollars rather than Bollywood movies.