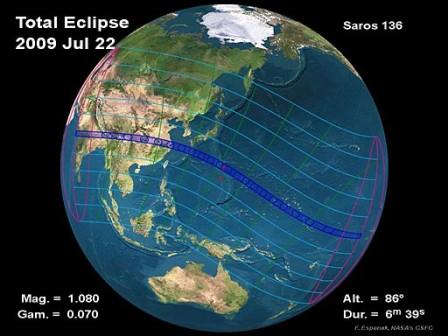 The path of total and partial solar eclipse on July 22, 2009

The total solar eclipse on July 22 2009 is visible within a narrow corridor that traverses half of the Earth, where the Moon’s umbral shadown begins from northern Maldives, northern India, eastern Nepal, northern Bangladesh, Bhutan, the northern tip of Myanmar, central China and on to the Pacific Ocean, Japan’s Ryukyu Islands, Marshall Islands and Kiribati. Although it’s just a narrow corridor, but many large cities are to witness total solar eclipse, including Surat, Vadodara, Bhopal, Varanasi, Patna, Dinajpur, Guwahati, Chengdu, Nanchong, Chongqing (Three Gorges Dam), Yichang, Jingzhou, Wuhan, Huanggang, Hefei, Hangzhou, Wuxi, Huzhou, Suzhou, Jiaxing, Ningbo and Shanghai, while a partial eclipse where the earth is covered under path of the Moon’s penumbral shadow can be visiable throughout most of the eastern Asia, Indonesia and Pacific Ocean, making the solar eclipse of July 22 2009 likely to be the most viewed solar eclipse in history.

For people who is unlucky enough to continue enjoy sun light and live in parts of the world that not in the path of solar eclipse, it’s possible to watch and view the whole total solar eclipse from the convenient of home in front of computer with various websites offering live streaming video feed or webcast. It’s even possible to view the live telecast right from this page: