Since the first release of Winamp player by Justin Frankel in 1997, today it has becomes one of most popular if not the best MP3 player for Windows operating systems. Although a lot of features and improvement have been included in each newer version but till the latest version of Winamp, it still does not support the integration with Windows 7 taskbar. To enable this features, an addition plug-in is required, which is called as Win7shell. Win7shell is a small plug-in for Winamp that makes it integrates with the new taskbar of Windows 7 to support Jump Lists. 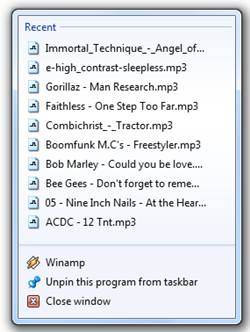