If you are technical sounds with good software background, there should not be any concern for you to write some simple coding in order to run some repetitive tasks. But if there is a choice, I think most of us would not prefer to write low level coding and that is how this utility comes handy in. Named as WinAutomation, it simplifies the code writing with nicely designed and user-friendly interface so that all the repetitive tasks can be automated, minimizing all the manual and non-productive boring repetitive tasks in daily life.

WinAutomation by Softomotive (aff) is an powerful automation tool that is able to simplify and automate any routine tasks in the most convenience and reliable way. For every repetitive tasks you have done every day, regardless of simple or complex, it will able to automate tasks in minutes without the need of writing any single script. 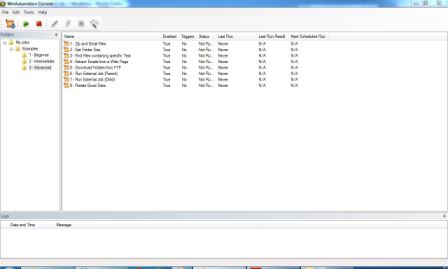 The major features of WinAutomation are:

Softomotive, the developer of WinAutomation, has made available a license to My Digital Life to review WinAutomation.

In our usage, installation of WinAutomation is very simple and straight forward, just like how most Windows apps are installed. The user interface of WinAutomation is clear cut and simple, especially for users who use backup software or any jobs-based application before. Using Win Automation may get more complicated (but not hard nor confusing) though. Depending on the tasks and jobs user wishes to automate, user may have to design an automated job by selecting from hundreds of actions in Job Designer, or use a very simple Macro Recorder to record mouse moves, mouse clicks and keystrokes for playback as automated job. The best thing is that no programming nor scripting required to create the automated process, significantly benefit non-advanced users.

Once a job is created, trigger can be set to fully automated the execution of the automated tasks without user input or interaction. The main strenght of WinAutomation is flexibility and full customization. Thus, WinAutomation has the potential to allow user to develop and build own program to replace any other program, such as backup software. Job Compiler which creates a standalone EXE out of any automated job provides an easy way for programmers to build easy application too.

In summary, this is definitely a great Windows utility tool for people who feel that he or she is always doing repetitive tasks regularly, and looking for a way to perform the tasks automatically. WinAutomation is compatible to run in Windows XP, 2000, 2003, Vista, Server 2008 as well as Windows 7 (in both 32-bit and 64-bit) suitable for both home and office environment. Users can click here to download a full 30-days trial professional version for immediate use. WinAutomation Professional Edition (aff) costs $199 a license while WinAutomation Standard Edition (aff) costs $129.00 a license.