Microsoft has officially released the developer preview version of Windows 8 during the BUILD developer conference. The Windows Developer Preview is a pre-beta version of Windows 8 for developers, and thus is not suitable for those looking for stable or intending to run on production system, as the downloads include prerelease software that may change without notice. 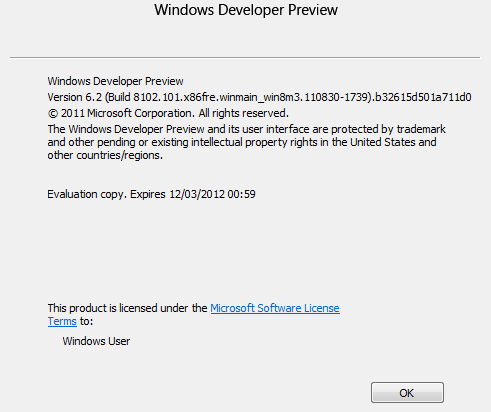 Windows 8 has the similar system requirements with Windows 7:

As it’s a prerelease software, some features are not available yet. According to Building Windows 8 blog, the preview build does not include the Windows Store, Windows Live Metro style apps, and some of the user interface features; and tha the focus of the preview is the API and development tools for building Metro style apps. In fact, Microsoft gives the following warning: The software is provided as is, and you bear the risk of using it. It may not be stable, operate correctly or work the way the final version of the software will. It should not be used in a production environment. The features and functionality in the prerelease software may not appear in the final version. Some product features and functionality may require advanced or additional hardware, or installation of other software.