Microsoft has lately official released the beta version of its new Windows Home Server, code named as Vail for tech savvy enthusiasts or developers to test and give feedback to the Redmond Company. Prior to this release, a Consumer Technology Preview (CTP 4) version of “Vail” was actually leaked back in January of this year. The new “Vail” is the version 2 release of Windows Home Server, based on Windows Server 2008 R2. This Vail beta could brings some excitement to testers and developers with its new features that focus on improvement in four areas: extending media streaming outside the home or office; multi-PC backup and restore; simplified setup and user experience; and expanded development and customization tools for partners.

Users or developers who are keen to explore this new development from Microsoft can download the software from the Microsoft Connect site. Microsoft has remarked that this Windows Home Server Vail beta version only works on 64-bit systems and the Company doesn’t recoommend users to run it on a 32-bit PC or existing Windows Home Server systems (even 64-bit Home Server systems) because there may be compatibility issues with some OEM drivers. The Redmond Company also highlighted that the minimum requirements to run this application include 1.4 GHz x64 processor, 1 GB RAM, and at least one160 GB hard drive. The build number of this release is 7495 and it is in 3,899 MB size. Installation ISO is labeled GB1SHSxFRE_EN_DVD, there is also a Server Restore CD and a Client Restore CD. 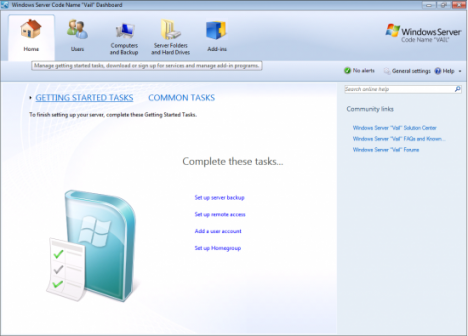 Users can view the short demo of some of the new features in Vail: