iPhone 3G has been cracked and hacked by hackers within days of official release, with PwnageTool 2.0 has been released previously to jailbreak iPhone 3G or jailbreak and unlock classic iPhone 1G or 2G with or without firmware OS version 2.0. PwnageTool only supports and runnable on Apple Macintosh Mac OS X system. However, an equivalent tool has been developed for Windows based system.

WinPwn is a iPhone unlocking and jail-breaking tool for Windows that compatible with Windows XP and both 32-bit and 64-bit (x86 and x64) Windows Vista. WinPwn is able to jailbreak and unlock older, classic or 1st generation iPhone which now also known as iPhone 1G or 2G and iPod Touch, and jailbreak iPhone 3G. By jail-breaking the iPhone, user can install Apple-unsanctioned, unauthorized or non-official third party applications, and unlocking iPhone allows user to use iPhone on another phone network service provider or carrier, i.e. non AT&T network in US. 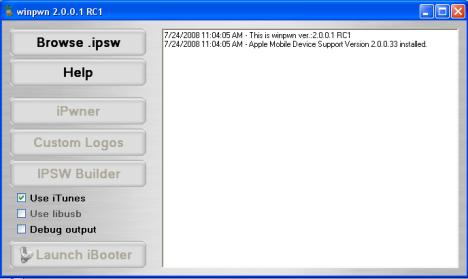 In reality, WinPwn, and PwnageTool which still cannot unlock iPhone 3G (although both of them can unlock first generation iPhone) is of lesser use, as jailbreak the iPhone for black market apps will likely to be less required in future. Although there is freedom to install any software applications that is not available or distributed in the App Store. But with the growing list of programs in the AppStore since more and more developers re-writing the software using the iPhone SDK, and more programs will be published via App Store.

WinPwn requires latest version of iTunes (currently iTunes 7.8) to work properly, and users have to uninstall any previous version of the software before installing. The latest version of WinPwn (latest version on 25 July 2008 is WinPwn version 2.0.0.3 which fixes the Ipwner crash problem, 16xx errors and iPod ipswBuilder failure bug), together with how-to guides can be downloaded from winpwn.com.