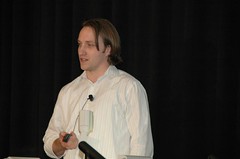 In an effort to stay competitive with revenue sharing viral video sites like Revver, Chad Hurley, co-founder of YouTube, said that his site will start sharing profits with its millions of users. The announcement was made during Hurley’s speech at the World Economic Forum in Switzerland this past Saturday. Many active YouTube users have started removing their videos and reposting them on Revver or Metacafe so they can make some money off their hard work. Revver started sharing profits with their users back in October of 2005.

“We are getting an audience large enough where we have an opportunity to support creativity, to foster creativity through sharing revenue with our users… So in the coming months we are going to be opening that up” Hurley said.

How much will popular YouTube posters like The Wine Kone or Adam Wade start making off their videos? It’s still unknown. Hurley didn’t go into any payment details during his speech.

About 70 million videos are viewed daily on YouTube, which was sold to Google for $1.65 billion last year.