Previously we mentioned about the first Acer’s Aspire powered by Nvidia Ion targeted for Nettop market, now seems that Zotac has just announced a Mini-ITX based platform, named as Ionitx that pairs Nvidia’s Ion with famous Intel Atom processor, competing against other rivals’ solution in nettop market. 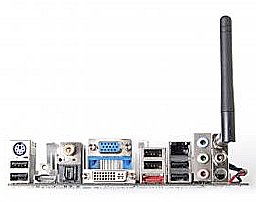 The platform can be designed with Intel Atom 230 single core or Atom 330 dual core with both of them clocking at 1.6GHz targeted for fanless application. Typically, Intel Atom will only be coupled with its own 945GSE northbridge and ICH7M southbridge, that being blamed of not able to satisfy consumers’ needs due to its inferior graphics performance. And now when pairing with Nvidia’s Ion chipset, it is expected to boost the hardware video decode capability significantly, allowing users to play full 1080p HD (High Definition) media clips without exhausting the CPU cycles. Some other features include the support of DirectX 10, extremely high resolution with up to 2560 X 1600 pixels suitable as a portable multimedia machine in digital home. In order to support all these graphics intensive functionality, the platform is designed with selection of legacy VGA, DVI, HDMI and even the advanced DisplayPort interface targeted for high bandwidth video display output. Similar to other netbook products, it is equipped with Ethernet, six USB ports, S/PDIF audio outputs, SATA as well as WiFi capability.

No pricing and availability yet, the new nettop will be reaching market space soon suitable for those that are tight of budget but would still like to enjoy good multimedia capabilities for daily usage.