The Korean company, Acelabs has released its new premium PMP (portable media player) which features an 2.8-inch QVGA 260k color touchscreen display, called as Handy S3. In addition, this handy PMP also comes equipped with wide variety of features including voice recording capability, an image/text viewer, a built-in speaker, along with an integrated FM radio and even transmitter which designed for jamming wirelessly in your drive, aiming to enhance your PMP experience. 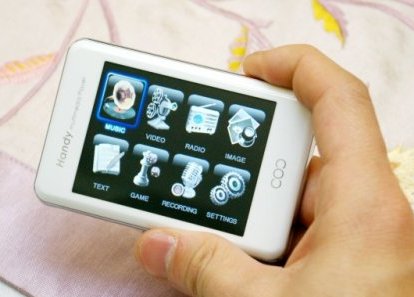 There is no built-in memory in the S3 player so your storage capacity is depends on up to 4GB of microSD-expandable storage. With the lithium-polymer battery, the Handy PMP can support up to 15 hours for audio/music playback and up to 4 hours for video. The new Acelabs S3 Handy PMP which measures only 88 x 57 x 11mm will available in black, white or pink colours but no words on its pricing yet.