After a year’s collaboration as a co-brand with Samsung, the world’s reputable sports apparel manufacturer has further developed and expanded its fitness gadgetry, miCoach, to be a more comprehensive and extensive coaching system. The initial miCoach set came with a heart rate monitor and a stride sensor that work together with Samsung phones to do fitness tracking and monitoring. The new miCoach fitness system, however, can be used without Samsung mobile phones and it has added another audio device besides giving real time feedback to users. 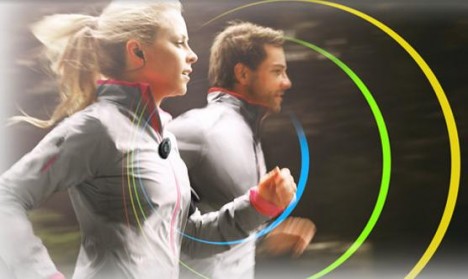 At first glance miCoach might lead you to think of Nike+ kit. Adidas miCoach can actually do more if compared to Nike plus. The comprehensive miCoach Pacer system that comes with a tiny audio device (miCoach Pacer) can communicate with the wearable Heart Rate Monitor and the Stride Sensor clip on the shoes to measure users’ speed, distance, stride rate as well as their heart rate. miCoach will give feedback to users on real-time results and give audible coaching based on users’ training plan that has been set earlier. The full miCoach Pacer system costs $139.99. Alternately, miCoach also offers another cheaper version, miCoach Zone which costs only $69.99. Unlike miCoach Pacer, miCoach only tracks users’ heart rate via the heart rate monitor.