Unfortunately Dell isn’t the only company plagued by exploding defective Sony batteries. On Thursday afternoon Apple announced that they will recall 1.8 million lithium-ion notebook batteries after nine devices overheated. Two people have even reportedly suffered minor burns due to these battery malfunctions.

You can check out some of the fiery Apple laptops in below clip from NBC’s Nightly News with Brian Williams.


This recall is the second-biggest consumer electronics recall in U.S. history. Dell proudly holds the #1 position thanks to the 4.1 million batteries they announced a recall for last week.

So how do you know if you have a bad Sony battery in your Apple laptop? The bad batteries were sold worldwide from October 2003 through August 2006 in the following notebook computers: 12-inch iBook G4, 12-inch PowerBook G4 and 15-inch PowerBook G4.

If you own one of these Apple laptops, carefully remove your battery and take a look at the numbers printed on the back. The battery serial number is printed in black or dark grey lettering beneath a barcode. See this flickr photo for more info. 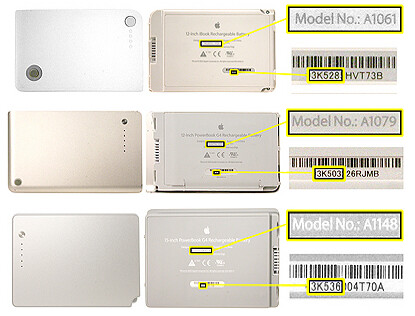 Once you mail your defective Sony battery back to Apple, you can still use your Apple laptop sans battery. Just plug in the AC adapter to power the computer until a replacement battery arrives. Apple pays for all the shipping costs and will even send you a postage paid label to send the bad battery back. Unfortunately you’ll lose the joys of laptop portability for about 4 to 6 weeks. That’s the estimated time it will take Apple to replace your battery. Look on the bright side – at least you won’t have to worry about a bonfire spontaneously igniting in your lap for a few weeks. Flame on!

For more information on the battery recall, check out this page on Apple.com.