Previously we mentioned about Gladius G0710 Intel Atom based ruggedized tablet PC released by Arbor technology back to 2008, now seems that the company has ready with its newly refreshed model redefined with extra durability and feature enhancements. 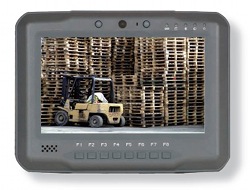 Named as G0710S, it is featured with a 7-inch 1024 x 600 resolutions touch screen LCD module with both front (1.3MP) and back (2.0MP) camera for video conferencing and social networking multimedia usages. Besides, it has been enhanced with RFID reader that is compliant to ISO 14443A/14443B/15693 industry standards. However, surprisingly that there is no upgrade in terms of processor and chipset with similar combination of 1.1GHz Z510 (potential higher 1.8GHz Z540) and US15W targeted for lower power and smaller form factor design. In order to add more value, the new refreshed version has been upgraded with 802.11n as an addition to existing 802.11b/g WLAN technology for seamless connectivity while moving around. That is not all, it adds a new SIM slot for GSM network support and the DDR2 memory has been changed from SODIMM to soldered-down version with similar 1GB capacity. This is probably to simplify the hardware design with trade-off on non-upgradable memory module in future. Other hardware specifications include 4GB CF (Comfact Flash) memory or 1.8-inch 60GB hard disk drive, USB 2.0 ports, Gigabit Ethernet and other legacy ports. More importantly, all these are well packed into a tiny 210 x 160 x 36mm dust and liquid sealed casing for extra durability with compliance to IP54 standard, as well as with ability to withstand 10G mechanical shock and 4-foot drops on wood surface.

No pricing availability yet, the machine is already available now with configurable multiple Operating Systems such as Windows XP, XP Embedded, Vista and Linux support.