Intel has successfully launched its Atom Z-series family processors back to April timeframe. Despite the negative news about actual performance as compared to VIA Nano, there are more and more good news about the end products powered by this small form factor processor that fabricated using 45-nm process technology being released to consumer market. Some of the fantastic end products include Nexcom MTC2100 Table PC, Sharp Willcom D4 WSO16SH UMPC, Panasonic CF-U1 Tough PC and etc. Not to be left behind, Arbor Technology has just announced the availability of its first Intel Atom based tablet PC for industrial market. Named as Gladius G0710, it is a ruggedized Industrial grade PC compliant to IP54 standard suitable for any tough environment and usage. 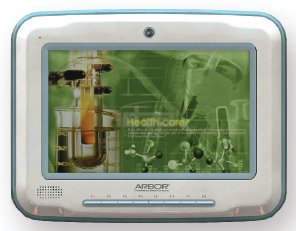 Gladius G0710 is measured around 8.3 inch X 6.4 inch X 1.2 inch, which is quite small and portable as compared to other similar range competitors’ products. Thanks to its tiny Intel Atom processor coupled with US15W SCH chipset. In terms of functionality, it is featured with 7” touch panel 1024 X 600 resolutions display with sunlight-readable capability. The Z540 Atom processor is clocking at 1.8GHz and being backed up by 1GB DDR2 SODIMM module. Besides, it consists of a 4GB solid-state DOM (Disk on Module) for OS and data storage. Other great features include the gigabit Ethernet port, 802.11b/g and Bluetooth 2.0 wireless technology as well as PCI Express interface for expansion usage. All these are sealed in a ruggedized casing that can withstand dust, humidity and even a mechanical drop of up to four feet height.

No pricing is available yet, the tablet PC will be preinstalled with open source Linux before shipment to consumers. Anyway, it is capable of running Windows OS (Operating System) such as Windows XP, XP Embedded and even Vista version.