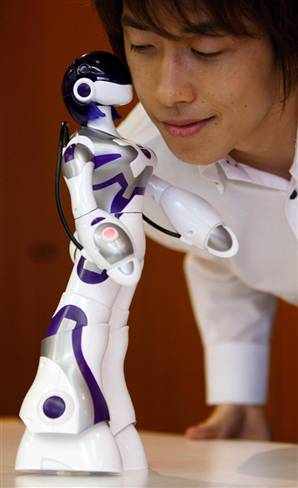 Not every guy is great in relationship. Probably they are not brave enough to express their feelings or are just insensitive about women’s need and therefore can’t get a girlfriend or partner. If you are unfortunate enough to be one of them and feel lonesome in the long lonely and silent nights, a Japanese firm has produced an interesting product which will probably draw your attention. This interesting product is a 38cm or 15inch tall robot which is petite, friendly and big-busted.

This artificial girlfriend dubbed by its inventors as “Eternal Maiden Actualization” (EMA) can kiss on command. The pretty lady runs on battery power and she uses her infra-red sensors to pucker up her boyfriend’s head and enter into a so called “love mode.” “She’s very lovable and though she’s not a human, she can act like a real girlfriend” – that’s the description from her designer.

Human life is so complicated and messy. There are so many problems and pressures in life. Sometimes humans just need a partner to talk to or share the pressure. The new robotic girlfriend is not a sex toy or sex fiend but she plays the role of an obedient girlfriend to accompany you on lonely nights. This new toy will go on sale in September at $175, and lonely adult men are its target market.