Buyer Gets Soap Instead of iPod 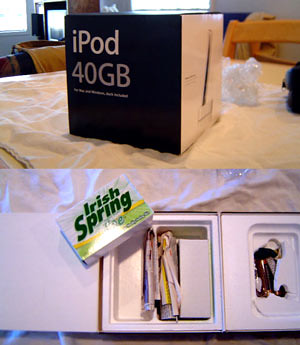 I was on Jason D. O’Grady’s PowerPage when I saw this article and started cracking up. We’ve all heard of the iPod’s vaunted “clean design,” but this is ridiculous.

Apparently someone named Sean bought what he thought was an iPod from Smalldog.com. However after removing the shrink-wrap and opening the box, he instead found inside two bars of soap and a package of cheap batteries.

As you can imagine, Sean was pretty pissed off. I found a write up of how his conversation with a Smalldog customer service rep went on Consumerist.com.

“I picked up the phone and gave Smalldog a call… I was ready to really tear into someone when a supremely polite and nice customer service rep answered the phone. When I told her about my situation (and not too nicely, I might add), she started laughing. For a second I was shocked! I mean, first you screw up, and then you laugh at me!? But the next thing I knew, I started laughing too. She used just the right amount of humor and seriousness in helping me figure out what had happened… She also wanted to know if I took any pictures, saying that she’d love to have a few to show the other people in the office… It was good to see that someone could have a sense of humor and still be incredibly accommodating at the same time.”

The big mystery to this story is how was the iPod box shrink-wrapped if it had already been opened? There are two theories.

We will probably know exactly what happened, but this tale does have a happy ending. Sean got a replacement iPod. The moral of the story: just because something is shrink-wrapped, doesn’t mean it’s actually in the box.