The international online retailer of mobile communication & electronic products, Cell-Savers has announced a new defence for screen privacy of digital devices, called as Magi-Privacy Screen, the one-size-fits-all film that makes your screen appear black to onlookers viewing your screen at more than 30 degree angle, aiming to prevent identity theft and invasion of privacy. 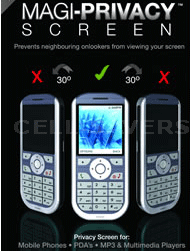 According to the online retailer, “Cell-Savers future plans include the addition of the Magi-Privacy Screen filter for use on computers and notebook screens and the Magi-Mirror Screen which converts the screen of mobile devices in to a portable compact mirror. Both the Magi-Mirror Screen and Magi-Privacy Screen function as tough screen protectors, protecting the handheld device screen from damage caused by scratches and preventing glare.”