Chinavision recently has unveiled its new MP4 player CVSJ-1304 that they claim as the world’s thinnest portable media player. It just 4.5mm thin device and fully packed with 1.8 inch touch screen that has a resolution of 160 x 128 supporting all sorts of multimedia format such as MP4, MP3, WMA, ASF and WAV. Additionally, it also has built in with FM tuner, a rechargeable battery and 2.0 USB connectivity. Other features of the CVSJ-1304 include Super Slim Design, Simple Menu Interface and Touch Panel Buttons. 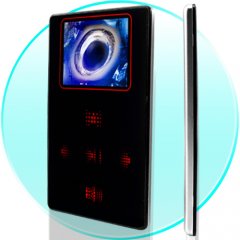 The details specification of CVSJ-1304:

Currently it is on sale for only $39.95, which is a great price for 4GB MP4 player. The package also included user manual, earphones, USB code and mini CD with driver.