Computing Pen to Take and Manage Your Notes

You don’t have to type laboriously at the computer keyboard; just write them with a special computing pen as you would on paper and you can manage your data with ease. This is the latest invention by Jim Marggraff, an inventor and entrepreneur who used to design toys. He believes this pen will revolutionize the way people interact with the computer. The computing pen is useful to college students, doctors, lawyers, businessmen and journalists. It will retail for less than $200. 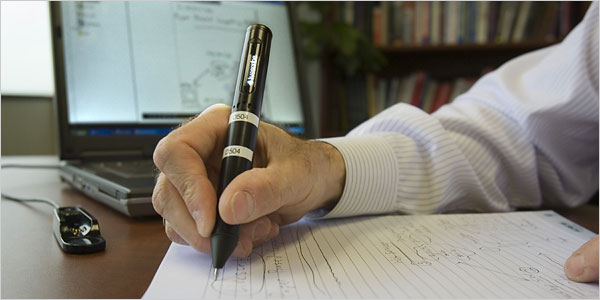 Marggraff’s invention puts the computer inside a fat ballpoint pen that is used on paper imprinted with very minute dots. As the user writes, a tiny camera near the pen’s tip records what is being written. The pen is also installed with two microphones to record sound, a speaker for playback, a small pixel bar display and a hidden computer chip. It can upload or download programs and data files to and from a PC. The pen also enables people to upload words, pictures and audio to their Web sites, blogs or social networking pages.

How do you use the pen? For example, you can take notes while interviewing someone. As you speak, the digital recorder inside the pen will capture your voice. After the interview, you can tap your pen on any word you scribbled on the page. The pen will begin to replay the interview, starting from the point when you wrote the word. You can skip backward and forward in the conversation by tapping on the appropriate word. You can upload the notes and interview into your laptop computer where you can organize, search or send the notes to others. You can also use other software to translate the written notes into text.

Controlling the computer with a pen has long been likened to the search for the Holy Grail in computer technology. Many great names in the computer industry have been disappointed in their attempt including Bill Gates, Steve Jobs, Apple, etc. But the computing pen is a relatively unfamiliar concept and the new generation is more used to keying messages in mobile phones and typing on the keyboard than writing with a pen. It will take some time and brilliant marketing to get computer users to use the pen again. However, “Anyone that is writing notes on paper, wants to capture the information, they want to access the information,” Mr. Marggraff said. “We are giving a way for people to essentially forget about forgetting.”