For Windows users who switch and upgrade from Windows Vista, one difference will be immediately noticeable when installing or upgrading to Windows 7, i.e. Install Windows 7 setup wizard no longer prompts or asks for user selection of which edition of the operating system to install. Instead, each Windows 7 DVD disc or Windows 7 ISO image will automatically install the preset specific edition which it’s confined to.

Although Microsoft does not provide an universal “one disc rules them all” Windows 7 installation media, however the function is indeed supported. User just need to delete and remove the ei.cfg from any Windows 7 ISO disc image to convert the image into universal disc of any edition Windows 7 installer.

For user who has the ISO image of Windows 7, and wish to make it an universal installer for any and all supported editions of Windows 7, as shown in illustration below, now has an easier way to modify the ISO. Instead of manually unpacking and extracting the content of ISO image (or copying files from DVD) to HDD, deleting the ei.cfg and then repacking or rebuilding installation files back into ISO to burn, user can now eliminate troublesome procedures by making use of “ei.cfg Removal Utility”. 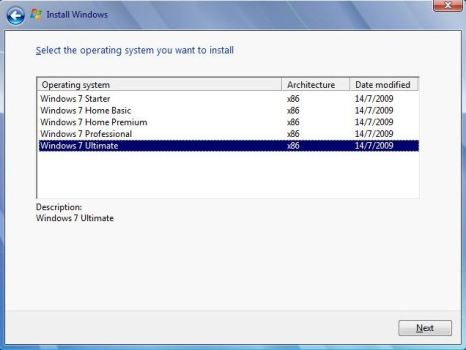 ei.cfg Removal Utility is a standalone portable app, and thus no installation required. In fact, the program does not have much user interface. After selecting the target Windows 7 ISO, the disc image will be patched right away. So make sure a copy of ISO backup is done.