However, all DVD of Windows 7 does contains and able to install all and any version of Windows 7, from Windows 7 Starter, Home Basic, Home Premium, Professional to Ultimate edition. Actually, the ability to select the version or edition of Windows 7 during setup installation, or which edition that the setup will automatically install, lies with a small configuration file named ei.cfg on the Windows 7 DVD, disc media or ISO image. 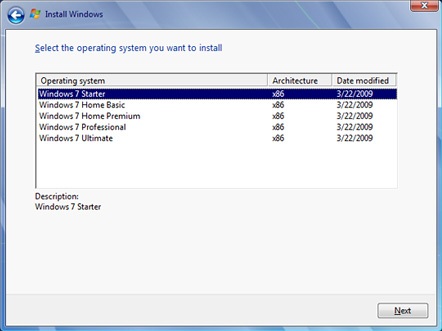 When ei.cfg does not exist, Windows 7 setup process will display a screen during Install Windows wizard to ask user to select the operating system (edition) to install. The selection of OS includes Windows 7 Starter, Windows 7 Home Basic, Windows 7 Home Premium, Windows 7 Professional and Windows 7 Ultimate. Thus, in order to be able to install any editions or install another different edition of Windows 7 without having to download ISO image or order a new DVD of Windows 7 with all SKUs enabled (allSKU version), use the following hack to delete or modify ei.cfg file.

Tip: Editing of ei.cfg can now be automated by Windows 7 ISO Image Edition Switcher, and deletion of ei.cfg with ei.cfg Removal Utility.