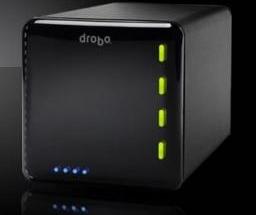 “Years ago Data Robotics set out on a mission: To create a set of technologies that allows storage to be safe, expandable and incredibly simple. Our customers have been asking for a high-performance FireWire connection since we launched Drobo last year, and this new release is the next logical step in providing users with what they need – and have come to expect – in the Drobo product,” said Geoff Barrall, CEO and founder of Data Robotics. “Our ability to deliver FireWire 800 in the newest version of Drobo gives us even more of an edge with two particular groups: Creative professionals who rely on the speed and performance of their equipment in their day to day work, and the Apple community which has a strong affinity for FireWire products.”

“When it comes to video editing, the faster the storage, the better, and this is where the new Drobo with FireWire 800 really shines,” said Andy Hirsch of Blue Moon Productions. “I had previously used Drobo as a backup solution for Final Cut Pro, but the enhanced performance of the second generation Drobo has allowed me to use it as my primary storage drive for video editing.”

The second generation Drobo is now available for $499, and the bundled 2TB and 4TB version are priced at $899 and $1299, respectively.