Photographers looking to spruce up their desks, mantels and coffee tables with their favourite digital snapshots have a more hi-tech, albeit pricey, option to printing.

Digital photo frames, which resemble their retro counterparts but house small liquid crystal display screens where the prints once stood, have been around for years. They’ve remained pricey, but with the cost of flat panel monitors and televisions continuing to drop, cheaper frames cant’ be too far behind.

If you are looking for a digital photo frame, perhaps you can consider the following suggestions. 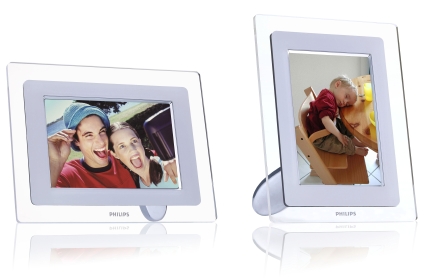 The first was the Philips 7FF1AW Digital Photo Display, a Mac-styled clear acrylic desk frame that can hold some 70 photos. Its bright 5.4-by-3.6-inch display packs 720 by 480 pixels and looks sharp from both up close and far away.

The overall frame design is aesthetically pure and feels rock solid. The design reminds us of the old swing-arm iMac display or first generation iPod with its combination white and heavy plastic frame. This is probably not by coincidence given the mad popularity of Jonathan Ive designs.

Once the photos are loaded, users can browse them manually or set up an automated slide show with adjustable timing and various transitions. A lithium-ion battery lets users pass the frame around at a party, but it’ll need a recharge within 50 minutes.

Philips has also launched an updated version of its seven-inch frame (US$199) and a nine-inch wall mountable version (US$249).

Download the product brochure if you want to find out more on the specifications. 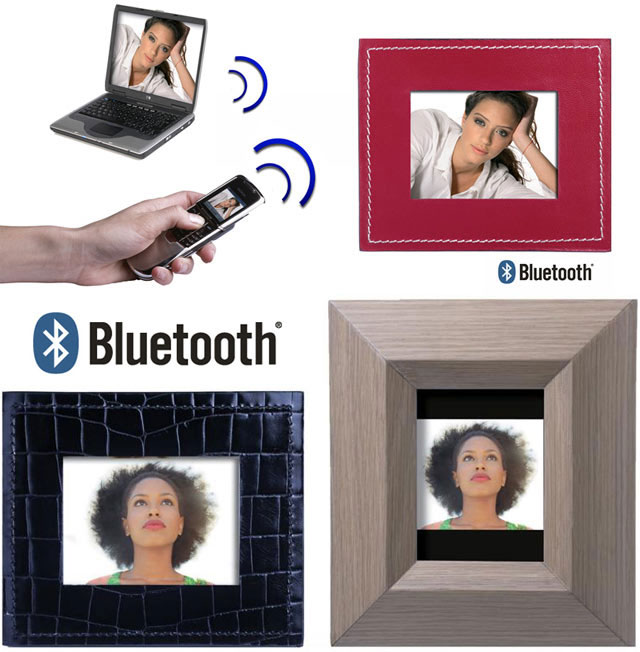 Parrot Photo Viewer is incredibly easy to use, works with all Bluetooth devices. It has a nice feature which allows you to receive, store and display photos from your phone or PC from a Bluetooth connection. It has a 3.5-inch LCD TFT screen with 320 x 234 resolution and 32MB storage which can store up to 100 photos in either landscape or portrait mode. A sensor switches it off at night according to the level of light. It is available in leather or white leaded oak design. You can find out more new product from Parrot official site.

If you are thinking to get Parrot Photo Viewer, make sure your phone can send photos through the wireless technology. From some users’ feedback revealed that a couple of Bluetooth phones could recognizes the frame but not send to it – despite a company information sheet that said the viewer is compatible with all Bluetooth phones, PC’s and other products. Double confirm with Parrot before purchasing it. Anyway, Parrot has announced that it’s developing a list of phone that can send to the frame.

Parrot Photo Viewer can hold more than 100 photos in JPEG format and automatically adjusts their size to conserve the 32MB internal memory. One neat feature allows users to physically flip the frame from horizontal to vertical and watch the frame reorient pictures so they display properly.

“Do you have parents or grandparents who live far away? Who may feel a bit disconnected from the family? Who just adore seeing pictures of your kids? Your life? Thanks to CEIVA, the maker of the CEIVA Digital Photo Receiver you can “Give a smile a day” by sharing pictures everyday with the people you care about most!…..”

Ya! That is CEIVA Digital Photo Receiver. If you are looking to share kids’ pictures with a grandparent who lacks computer savvy, check out the Ceiva Digital Receiver (US$129.99 plus a monthly subscription). 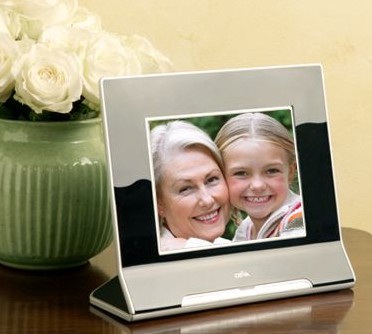 Just upload images to Ceiva’s Web Site and a remote technophobe can sit back and wait for the frame to automatically download a slide show of up to 30 new photos each day.

Ceiva’s required PicturePlan service costs an additional US$9.95 a month, US$99.95 for one year of service or US$249.95 for three years. But a single subscription allows multiple people on the frame’s buddy list to submit photos, which are downloaded rightly over a telephone line or a wired broadband or wireless Internet connection. The frame can also be connected via the optional USB wireless adapter (US$34.95), which worked well after a bumpy setup.

To get the frame talking to the wireless router, you must first enter the setting on Ceiva’s Web Site and tell the frame to dial in through an analogue phone line. During a free support call, a customer service representative suggested connecting a USB keyboard directly to the frame and manually typing the wireless settings, which got it up and running. Once in sync with the router, the frame downloaded the photos

Users can also send pictures from camera phones and mix in daily slides featuring baseball standings, historical trivia or weather forecasts. The device’s once-button printing feature allows users to order prints right from the frame and have them delivered by mail.

The Ceva’s 6.5-by-five-inch screen is bright when viewed head on, but looses clarity from side angles. The company is developing a receiver that boasts a larger and higher-end display.

“Digital cameras have helped open photography to the masses, but they’ve also pulled our picture collections from decorated photo albums and shoeboxes to sterile hard drives and memory cards. Perhaps digital frames will give us more way to bring our pictures back into the living room.”