Imagine if your dog had a voice, what would it say? Remember the movie, 101 Dalmatians, where animals are given human voice and their thoughts translated into verbal speech. Well, a Japanese toy company, Takara, released a device called BowLingual in 2002 which enabled dog barks to be converted into text on screen. The device was honored by Time magazine as ‘Best Invention 2002.’ Recently, the company has upgraded BowLingual so that the barks can be translated into vocalized speech. The device is easy to use for users just need to attach the bark sensor collar to the dog. 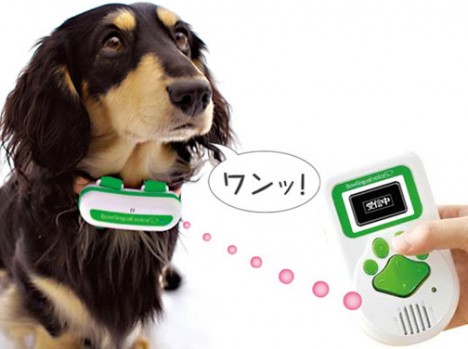 Users, of course, must not take the translations of dog language too seriously for this device is meant more for the owners’ entertainment rather than the dog’s lucidity. The dog language is categorized into six emotional states represented by a humorous phrase. In addition, all dogs wearing the collar will only speak Japanese, courtesy of the inventor. The inventor Takara claimed with a straight face that the device works with over 80 different dog breeds.