We have been mentioning about new Intel Atom processor Z5XXPT with larger foot print and extended temperature support and if you wonder what actual platform that has been specifically designed based on this, now here is one of them that you may be interested in. Just recently, Eurotech has announced a COM (Computer on module), with the name of Catalyst XL based on Intel Atom Z5XXPT and SCH US15WPT as well as a relatively larger Catalyst FX carrier board to extend various peripherals IOs support targeted for developers and system builders. 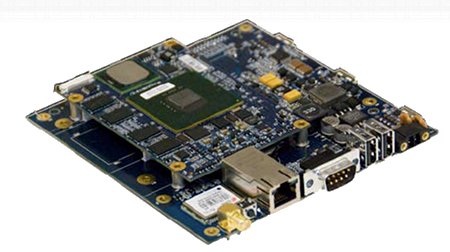 Intended to be used as development and reference platform, the Catalyst FX carrier board measured at 127mm X 110mm populates all the necessary IOs so that developers can selectively validates certain functions provided by Intel US15W XL chipset before customizing them dedicated for different applications. With the main processor, chipset and DDR2 memory module sit in the COM module, the carrier board extends its functionality with Compact Flash slot and SATA hard disk drive expansion on top of other functions include Gigabit Ethernet RJ45 connector, RS232/RS485 DB9 interface, USB 2.0 host ports, audio IOs and many more. However, video output such as LVDS, VGA, DVI, HDMI are not designed into it but instead, they can be provided through optional expansion cards depending on usage models.

No pricing information yet, Catalyst FX and XL are already available now and you can expect them to work with various Operating Systems such as Windows XP, XP Embedded, CE, Wind River Linux 3.0 and many more since it is based on X86 architecture.