Few days ago we just mentioned about USB 3.0 Specification has been finalized and released to developers, now Express card version 2.0 standard which is based on the newly defined USB 3.0 as well as PCI Express 2.0 specification has also reached another new milestone. Either one, which offers much higher throughput scaling from minimum of two times up to ten times as compared to current version 1.0 will definitely attract board makers to design it into their next generation notebook PC. 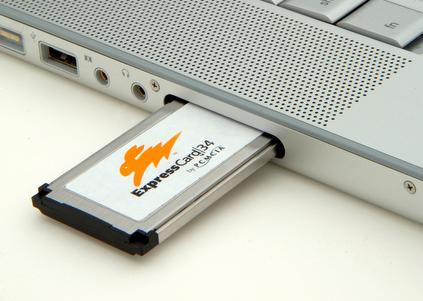 ExpressCard standard has penetrated well with estimated 95 percent of market share in notebook segment. Some of its current applications include wireless Ethernet module, TV tuners, serial ATA adapters, smart card readers and much more. And with the finalization of the USB 3.0 specification, it allows PCMCIA to move one step further working on Express card version 2.0 compatible products.

Theoretically, current ExpressCard can provide the total throughput with up to 2.5Gbps, which is around two times more as compared to conventional CardBus at only 1.04Gbps. Now with version 2.0, we expect a further performance boost of up to 5Gbps by having two PCI Express X 1 lane bus. That is not even taking USB 3.0 into consideration with potential of ten fold increment over existing USB 2.0 specification.

Similar to USB 3.0, ExpressCard 2.0 specification is backward compatible with its previous version and is expected to be released by early 2009 with the actual prototype readiness by 2010.