Posted: May 1, 2009/Under: Operating Systems/By: My Digital Life Editorial Team

FixTunes is a software utillity to organize and fix MP3 music tags and name, in addition to add album art to the song and audio track. FixTunes, as its name implied, can automatically fix any missing or misspelled song details, add album artwork, remove duplicates songs, beside allow users to manage their collection of music. 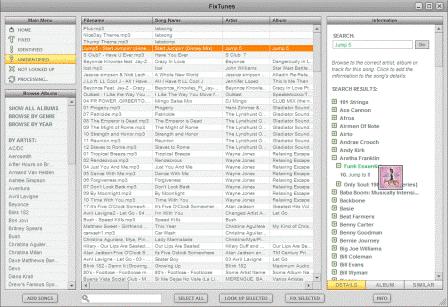 With the great help FixTunes provides in organizing music, the price tag of $24.95 looks reasonable. But nothing beats free. Those who intend to purchase can grab the 30% off FixTunes discount code, exclusive for My Digital Life readers. In addition, there are 10 free licenses for FixTunes to giveaway to lucky winners.

But before you enter into the giveaway contest, it’s recommended to download and try FixTunes to make sure that it works. The trial version of FixTunes is available for download for free from fixtunes.com. FixTunes supports Mac OS X and Windows operating system. FixTunes for Windows has further 2 variants – iTunes version and non-iTunes version. Currently the FixTunes Windows non-iTunes edition is version 4.82. A new updated version will be released soon, and all winners who get the free license are entitled to the free upgrade too.

10 winners of FixTunes full version license will be selected randomly after the contest period ends. The sponsor will email the purchase code to unlock FixTunes for full unrestricted use. The setup installer of FixTunes can be downloaded from fixtunes.com.