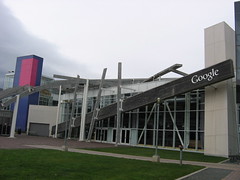 Thanks to Google, residents in Mountain View, California have one less monthly bill to pay every month… their Internet. But does Google have national WiFi ambitions?

This month Google launched their free wireless Internet service called Google WiFi Mountain View. The service is completely free to the 72,000 residents of Mountain View and is not supported via ads. It covers the 12 square mile radius of the town and is comprised of some 380 access points.

Speeds have been reported at 1Mbps and Google is hoping that their product will convince many residents to drop their DSL & Cable offerings. Although these speeds aren’t super fast, Google’s free alternative will be something that most people will embrace. People who still want their high speed connections will have to pay for it.

If you’re not in Mountain View don’t despair, Google has teamed up with Earthlink for a more ambitious project – providing wireless Internet service to the San Francisco area. The San Francisco service will be a little different from the one now available in Mountain View in that it will be tiered. The free service (300 Kbps) will be supported by ads. If you want higher speeds (1 Mbps) without the ads, then you will have to pay monthly subscription fee.

So what is Google really up to here? Is Mountain View and San Francisco just beta cities for something much bigger like national WiFi? Google has been quietly buying up miles of “dark fiber” across the United States for years. Add that fiber network to the Wimax routers and chip sets slated to hit the consumer market next year and Google could wipe out the telecom and cable companies before they knew what hit them. Think about it… Google could instantly become a national ISP, phone (VoIP) and TV provider for the entire country.

It sounds easy but consider the deployment difficulties of a national network. A single WiFi base station can only cover a limited area. With overlap you are probably talking about 300-500 base stations per square mile depending on terrain. I’m no math major, but how many base stations would Google need to cover the entire United States? Over a billion? If Google did decide to build a national network, they’d probably have to hire all those former cable and DSL employees just to repair and maintain this massive network.

National WiFi domination… something to think about.