With iPhone 4 still in great demand everywhere, it’s hard to imagine that one can buy brand-new and sealed unlocked version of Apple iPhone 4 at rock-bottom price that is even cheaper official price quoted by Apple retail or online store. Coupled with the fact that the price of iPhone 4, both 16GB and 32GB versions, is the lowest in the world, customers who willing to buy iPhone 4 is getting quite a steal.

The official price for 16GB iPhone 4 in Hong Kong is HKD $4,988 (USD $642) while 32GB iPhone 4 sells for HKD $5,888 by Apple (USDB $758). Thanks for massive hoarding of iPhone 4 by scalpers in Hong Kong, who are now in panic mode due to Apple continuous selling and flooding of iPhone 4 stocks in the market since early April. Since April 11, the iPhone 4 has been continuously available on Apple Online Store as supply finally caught up with the demand, with shipping times cut from as long as 5 weeks to just under 1 to 3 business days. Apple has suspended direct sales of iPhone 4 through its Hong Kong online store with “Currently unavailable” status most of the time from the launch of iPhone 4 until now. As and when the Apple online store is opened, all iPhone 4 stock available will be snapped up in less than an hour, causing the closure of the online store again. 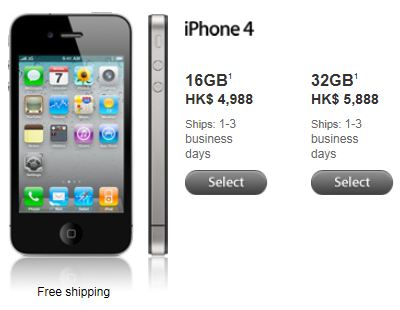 With influx of official stocks, and as the result of the iPhone 4 scalpers and “stockists” panicking and trying to dump whatever stock they have on hand, the buy back price of iPhone 4 has been free fall, and in the last few days has fell below official Apple Store’s price. To make matter worse, Apple Hong Kong has implemented a policy to charge a 15% restocking fee for unopened return product, which costs any returnee $748 for 16GB and $883 for 32GB version.

According to Apple Daily, the buy in price of brand new sealed SIM-unlock 16GB iPhone 4 falls to as long as HKD $4,700 (USD $605), while 32GB versions drops as low as HKD 5,800 (USD $746). Report also stated that they’re people who hundreds of sealed brand-new iPhone trying to unload the phones at below cost, taking a loss of several thousand dollars. Of course, the profit of scalping iPhone 4 for almost 9 month without risk will probably able to cover any loss, where at the peak, price of 16GB iPhone 4 can hit as much as HKD $9,800 (USD $1, 260).

The unlocked iPhone is sold as cheapest rate in Hong Kong when comparing with all markets globally, thanks to its tax heaven with no sales tax. Importers and visitors from neighboring countries or regions such as mainland China, and India would snap up as many iPhone 4 as available in Hong Kong to resell at home market at mark up price on the gray market. The trade has been joined by a large army of scalpers in Hong Kong who bought virtually every iPhone 4 available (until now) to sell at a premium to dealers or exporters who have link to overseas’ markets.

Anyway, as a visitor you probably won’t be able to get below official price iPhone 4 easily on the gray market in Hong Kong, unless you know a little Cantonese can get iPhone directly from scalpers who are stuck with massive quantity of iPhone 4. But with iPhone 4 available around the clock on the Hong Kong’s Apple Store, you still can buy the cheapest iPhone 4 in the world from official channel.