Netbook is famous for its competitive price and lightweight which is about to replace low end notebook in consumer space. In order to differentiate from other rivals’ solutions, Gigabyte has tried to come out with an innovative netbook design that integrates with touch screen tablet PC functionality. Named as T1028X/G, it is featured with a rotatable touch screen LCD that can be flip and fold down for easy portability while on the move. 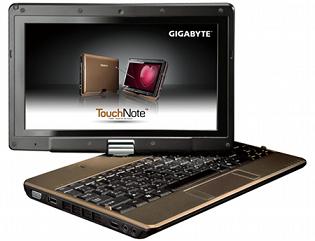 As compared to its predecessor T1028M that was based on Intel Atom N270 series processor, the new T1028X/G series is powered by a newer and much more powerful N280 processor running at 1.66GHz that can provide significant processing capability for normal office applications. Besides, it is designed with bigger screen size of 10.1-inch, as compared to 8.9-inch in its previous version, which at the same time able to scale up the screen resolution from previously 1024 X 600 pixels to current 1366 X 768 pixels for greater viewing experience. Although some do expect better performance in terms of hardware video decode capability but in reality, the chipset companion chip is still stuck with 945GSE with ICH7M as similar to its predecessor. Other specifications include an a 1GB DDR2 RAM, 160GB SATA hard disk drive, ExpressCard slot, Ethernet port, 802.11b/g/n wireless technologies, a built in 1.3-megapixel camera module, USB ports and many more. Not to be lack behind, it offer an optional support for HSDPA cellular modem as well as WiMAX module for seamless connectivity while traveling around.

No pricing and availability yet, the netbook will be reaching consumer market soon, competing against other existing solutions in this competitive market space.