Most Synaptics TouchPad can support multi-touch gesture capabilities, which normally depends on software driver support. However, default official driver for Synaptics TouchPad device on most notebook and laptop does not enable these Synaptics Gestures features, instead locking them, probably due to marketing purpose.

Two Fingers Gesture allows user to enable two finger scrolling feature which is included on newer version of Apple MacBook, allowing user to use two finger motion gesture on the whole surface of touchpad to scroll horizontally and vertically instead of have to move to virtual scrollbars on the edge of the trackpad. 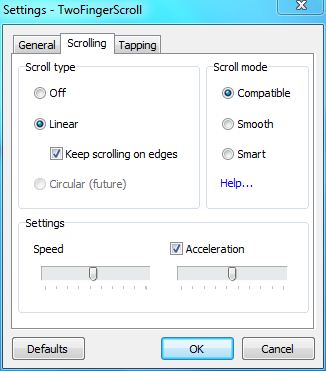 Two-Finger-Scroll does not require installation. Just extract the TwoFingerScroll.exe from the ZIP archive, and directly run the executable to simulate two finger gestures feature. Two-Finger-Scroll can be configured to run at system startup.

When ran, Two-Finger-Scroll software will display a hand icon in the notification area (system tray). To configure virtual scrolling with two fingers on TouchPad surface in Windows, right click on the icon, and select Settings. On the General tab, user can set whether to let TwoFingerScroll.exe starts with Windows. Scrolling and Tapping tabs allows user to further customize the scrolling functions, with default settings should work without problem.