Posted: May 31, 2009/Under: Operating Systems/By: My Digital Life Editorial Team

Multi-touch or multitouch functionality has been attracting consumer attraction, thanks to iPhone and iPod Touch, two-finger-scroll in Apple MacBook with TrackPad, and Windows 7, which has built-in multi-touch mapping application, photo viewing program, and gesture support in Internet Explorer 8. Multi-touch is essentially a set of interaction techniques which allow computer users to interact and control graphical applications with fingers.

While normally multi-touch is best performed on touch screen that recognizes multiple simultaneous touch points, the touchpad on laptop and notebook computer does potentially able to be used for multitouch gesture too. Synaptics TouchPad is one such pointing device that supports multi-touch. Most of the Synaptics TouchPad hardware devices do support multi-touch, which is implemented at software driver level as Synaptics Gestures. In fact, Synaptics had a commercial video titled “Things You Can Do With a Gesture” to promote new notebooks with Synaptics Gestures.

However, for marketing reason, Synaptics official standard drivers for most Synaptics TouchPads does not support multi-touch Synaptics Gestures. Synaptics’ drivers lock gesture features on all non-supported OEM notebooks and laptop PCs, except for certain gadgets such as ASUS EEE PC. So multi-touch is disabled even though touchpad hardware does support them.

The Synaptics TouchPad driver should support all Windows operating system such as Windows XP, Windows Vista and Windows 7. However, do note that the digital signatures of the modded drivers have been broken, and the drivers are no longer signed. Thus, there may be issue when use in 64bit operating system which enforces strict driver signing requirements.

After Sypnatics TouchPad modded driver is installed, Two Fingers Gestures, Three Fingers Gestures, ChiralMotion and Momentum should be now supported and enabled, depending on TouchPad hardware. Unfortunately, Pinch gesture, which similar to iPhone’s multi-touch, is not enabled. If your Synaptics TouchPad does not offer two fingers gestures, try the two-finger-scroll utility to force enable 2 fingers gesture. 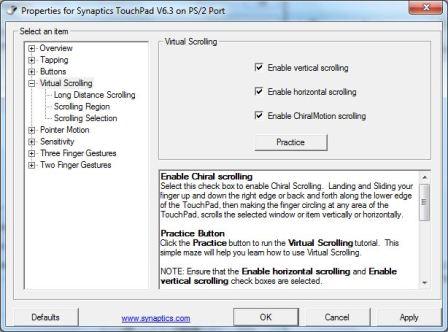 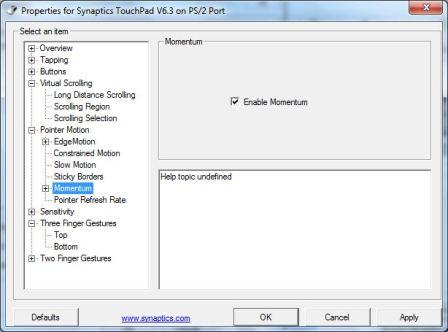 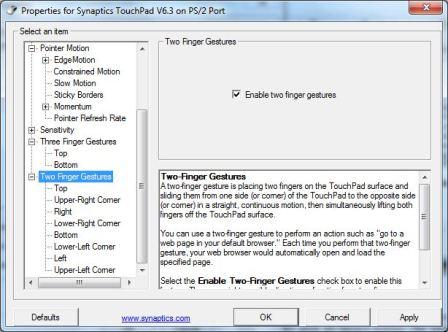 IMPORTANT: Do not upgrade the Synaptics TouchPad driver if you love these touch features, as Sypnatics locks and disable the advanced touch features from driver v11.0.0.0 onwards.