Wanted to be able to view 3D video contents on your iOS devices such as iPhone and iPod touches? Some has started to speculate that iPhone 5 may support 3D viewing capability but before it gets any confirmation, Hasbro, the famous toymaker has announced a new handheld 3D viewer device targeted for iPhone and iPod touch users, bridging up the gap in enabling 3D display without limitation on 3D hardware graphics core on iOS devices. 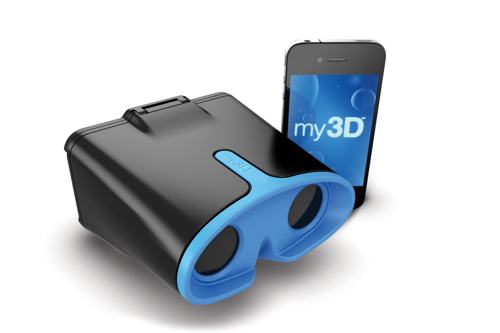 The handheld 3D viewer looks quite similar to a pair of binoculars but with a cradle at the end that fits nicely to both iPhone and iPod Touch housing, it provides an impressive 3D viewing capability as well as some 360 degree panoramic viewing experiences together with the use of stereoscopic apps. In conjunction with the hardware release, there are quite a number of My3D apps being released at no charge at this moment. Some copies include My3D Presents, My 3D Sector 17, My3D 360 Degree Sharks, My3D Bubble Bolt, My3D Shatterstorm, My3D Tunnel Pilot and many more.

Planned to be released at USD35 at Target stores and its online website, the Hasbro’s 3D viewer is compatible with iPhone 3G, 3GS, 4 and all the 2nd, 3rd and 4th generation of iPod Touches.