Looking for hidden spy camera? Here’s an alarm clock radio with a built-in spy pinhole camera! The table radio with alarm clock functionality has a very tiny and micro digital camera that is well hidden inside the body of radio itself, and a built-in transmitter will transfer the video captured to the computer. Without question, the spy pinhole camera and transmitter which are built-in together is well hidden and definitely invisible to the human eye. 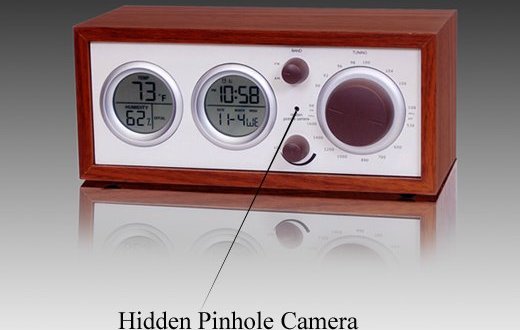 The user-friendly spy camera is easy to operate, it can transmits to a remote receiver for recording whatever it spies. What you need to do is just plug and play! This hidden spy pinhole camera clock is purposely built for security purposes but it looks like a warning advice and guide for the public to avoid such device, just in case, else you may involve in any sex video scandal. This hidden spy pinhole camera radio clock costs for about $64.