Windows 7 has a new feature called Jump Lists which provides an easy access to various functions or features related to the programs directly on the applications’ icons or buttons on the Taskbar. Jump Lists, which is popping up and displayed whenever user right clicks on an icon or button on Taskbar, also shows recent items that opened or closed by the app, or frequently used or most visited items by the program.

While the recent items that appear on the JumpLists allows user to quickly re-open the files, these access information may be deemed private and sensitive to some users. Windows 7 provides an easy way to delete and remove the recent item from the Jump Lists:

On the Jump Lists, right-click a recent item, and then click on the Remove from this list option. 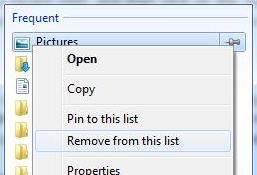 The item will be removed from the Jump Lists. However, the method will only allow removal of recent or frequent items one by one, which may be time consuming for applications that has bigger number of recent items on Jump Lists.